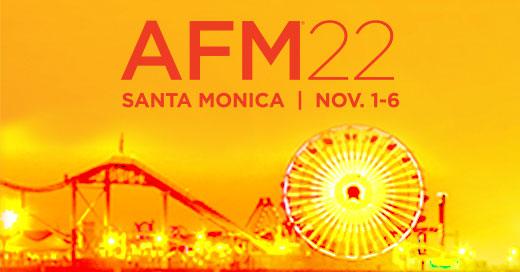 Approximately 3,700 Media and Entertainment (M&E) executives from 3,000 companies attended either in person or online, attempting to pitch, sell or buy 623+ films and television series produced in dozens of countries across every genre. National and regional film agencies also attended, promoting locations, incentives, and production facilities available to content creators. These numbers do not reflect the countless other projects in various stages of development being pitched by directors or producers seeking financing, partners, or distribution deals by conference attendees. AFM 2022 was M&E beginning a return to a post-pandemic normal.

Over the week, we observed three themes that drove much of the discussions at AFM: competition between platforms, the globalization of content, and challenges facing everyone in the industry.

Not surprisingly, competition across the industry was a central topic of discussion. The alphabet of VOD, FAST, OTT, OTA, and CTV was on display. And it was hard to ignore the content amplification platforms like TikTok, Instagram, YouTube, and others. All this attention competition was assuredly at the top of everyone’s minds.

Questions like, “How do I choose a platform?” “Which platform reaches my target audience?” “Is placing my title on multiple platforms better than targeting just the large ones?” “Who offers the best revenue share?” and “What do I need to provide the platform,” were asked and answered hundreds of times.

Many industry leaders spoke of linear television’s expected demise and theatrical releases’ contraction as people move online and purchase larger television sets. The exponential growth of mobile distribution, the expansion of publicly available internet connectivity, and the increasing number of ad-supported platforms were discussed as persistent factors driving both platform and content competition. This is despite slowing advertising spending across all sectors of the economy.

The global success of foreign-language titles such as “Squid Game” and the increased desire of many to replicate that experience was another key takeaway from AFM. Directors and producers were asked the extent to which they’ve considered how their stories will be accepted in other countries and cultures. Post-production companies were asked how effective their localization is and whether they can provide insights into which countries are most receptive to a given title or story. Platform executives were questioned about the efforts they’re willing to undertake to prepare and promote titles internationally.

This interest stems from believing that a particular story will travel well. The underlying question is whether the international release will help make a profit and, if that’s a possibility, how do you do it, what’s the cost, and who can help do it without damaging the title or the brand? The answer to all these questions is a complex “maybe”.

The changing global economic condition was the third most significant takeaway from AFM 2022. Several panels addressed the recession’s impact on theatrical ticket sales, streaming subscriptions, advertising investments, and platform content budgets. Although subscription and advertising revenues are expected to slow or slightly contract, few expect the content acquisition budgets to be significantly impacted. Why? Because content is what drives subscriptions and good content reduces churn. Investment in good content consumers want to watch means the “other guy’s subscribers” churn, “not ours.”

Of the conversations we had with people directly involved in content development or purchase at AFM, few felt the amount of money spent would change much. Instead, they believed the focus would shift from the number of titles bought to the quality of the stories they tell. Other factors such as budget, a title’s attractiveness in countries and cultures, and longevity will still contribute to the decision process. Still, the heydays of buying titles without full consideration of the story, its quality, and reach are a thing of the past.

Anyone familiar with entrepreneurial markets and industries knows there is a time when land grabs are the driving factor in business and financial decisions. “You have to spend money to make money” and “plant the flag” are well-known refrains. Over the last few years, these phrases have become standard in M&E.

While there are still companies willing to challenge conventional wisdom and do things differently, AFM 2022 provided clues that the wild west days for streaming may be coming to an end. The settlers are now beginning to refine their market niche. Time will tell, but for now, successful content companies will focus on the competitive opportunities that currently exist worldwide, fully aware of their challenges. It’s an exciting time to be in M&E.