The latest episode of ‘Auto Aficionado’ features a slice of classic Americana with the most popular selling car of all time (still to this very day) …the first generation Ford Mustang.

Combining his love of movies and classic cars, Ted has used his Mustang as a Hollywood picture car, appearing in several films, tv shows, and music videos. The episode goes into the history of the Ford Mustang and where the name and logo really come from as well as what made the Mustang the highest selling automobile model in the world.

The pony car is a classification that needs minimal introduction. It’s the stuff of legend, really. And the list of reasons for its status is long and filled with some true American-made icons. You know the one’s we’re talking about. The Pontiac Trans Am. The Dodge Challenger. The Chevrolet Camaro. And those are just a few examples.

Arguably the most iconic of all, though, is the Ford Mustang. This muscle car is currently in its sixth generation and selling in droves, and it’s not difficult to see why. It looks great, drives well, and represents great value for money.

In 1967, Ford’s Mustang saw its first major redesign. For the first time since its launch, the car faced some serious competition. This resulted in Ford evaluating the Mustang’s strengths and weaknesses. In addition to the Pontiac’s Firebird, Mercury’s Cougar, and Plymouth’s Barracuda, Chevrolet had plans to roll out their new Chevy Camaro muscle car. This resulted in Ford duking it out with its competition by creating a more muscular and powerful Ford Mustang.

Feeling pressure from their competition, Ford needed to make the Mustang more powerful so it could keep up with its competitors. The answer came in the form of a larger car. Although the wheelbase remained the same at 108 inches, the length of the vehicle was increased by two inches resulting in 183.6 inches from front to back. The car also featured a front-suspension track that was widened by 2.5 inches. The increased body size allowed Ford to put their first big-block engine in a Mustang. This optional 390-cubic-inch 6.4L V-8 motor was capable of producing an impressive 320 hp. As such, Ford was clearly able to keep up with the big dogs on the road. In fact, according to reports, the 390 cid equipped Mustang could achieve 0-60 mph in 7.4 seconds with a top speed of 115 mph. 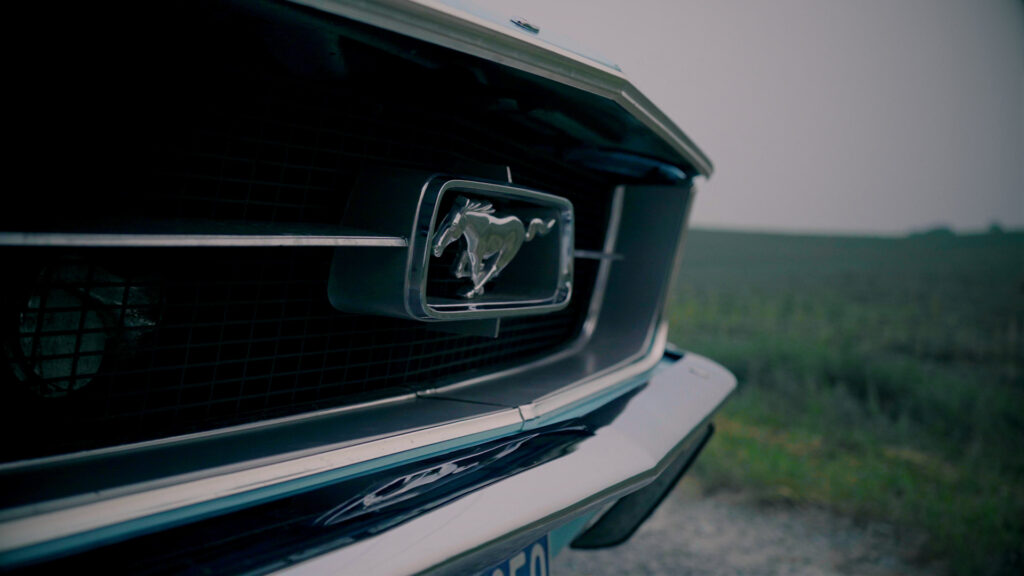 Other notable changes to the 1967 Ford Mustang included side scoops that were painted to match the colour of the car. In the past, the Mustang’s side scoops were chrome plated in design. The new scoops more closely resembled real intakes than in previous model years.

The front end of the 1967 Ford Mustang was also different than in the past. Gone were the three gills that appeared next to the headlights on the 1965 and 1966 Mustang. The grille was also different, featuring vertical and horizontal bars that worked their way out from the galloping horse in all four directions. In addition, the opening to the grille was larger than in the past. This redesigned front end made for a muscular looking Mustang. 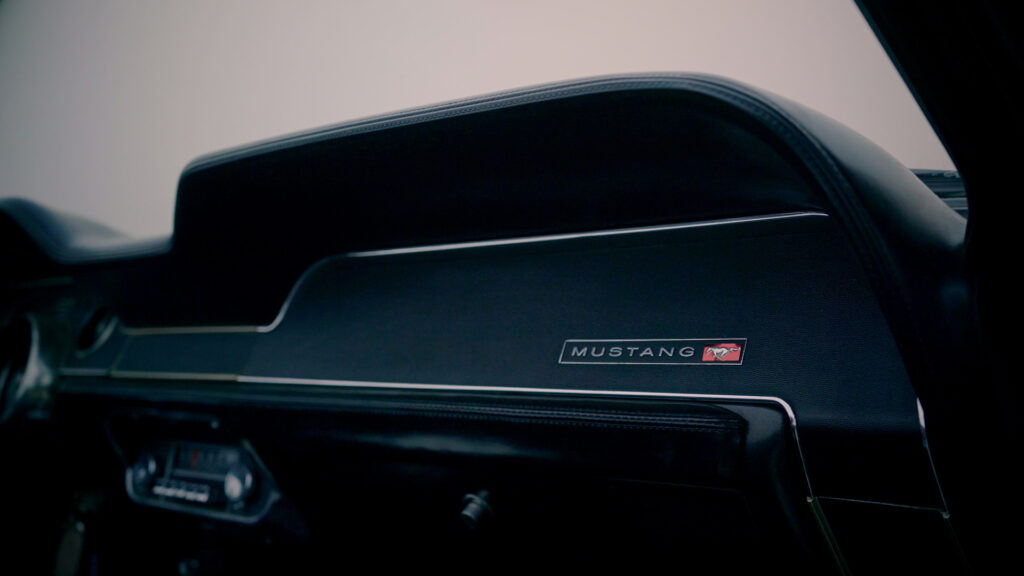 The rear of the 1967 Mustang was also noticeably different than in previous Mustang model years. For the first time the Mustang’s rear tail lights were larger and concave in design. In the past the Mustang’s rear had been convex and basic. As for the 2+2 Mustang fastback model, its roofline now ran all the way to the rear trunk lid. A special ribbed rear panel with chrome bezels could be ordered by fastback owners seeking a customized look. In all, the rear of the Mustang looked bulkier and more performance oriented. Additional options for the 1967 Mustang included a GT package that featured driving lamps, side stripes, and a dual exhaust. You could also order a hood with dual recesses as optional equipment.

As for the Convertible Mustang, it featured two glass panes which made up the rear window. Gone was the plastic convertible window of the past.

Of note, 1967 was the last year F-O-R-D block lettering appeared across the front edge of classic Mustangs. This feature would not return until 1974. It would also be the last Mustang to feature the 289 Hi-Po Engine. These tidbits of information might come in handy when working to distinguish a 1967 Ford Mustang from a 1968. Upon first glance, the two model years closely resemble each other.

In all, the 1967 Ford Mustang was considered by most an improvement over previous model years. It was more powerful, it featured an improved suspension system, and it had an aggressive appearance.

In fact, the “Eleanor” Mustang featured in the Nicolas Cage remake of Gone in 60 Seconds was modelled after a 1967 Shelby GT500 Mustang. The 1967 GT500 featured a special 428 cubic inch V-8 engine which, with Shelby’s engine mods, resulted in around 355 hp.

Ford offered a choice of five engine configurations in 1967: 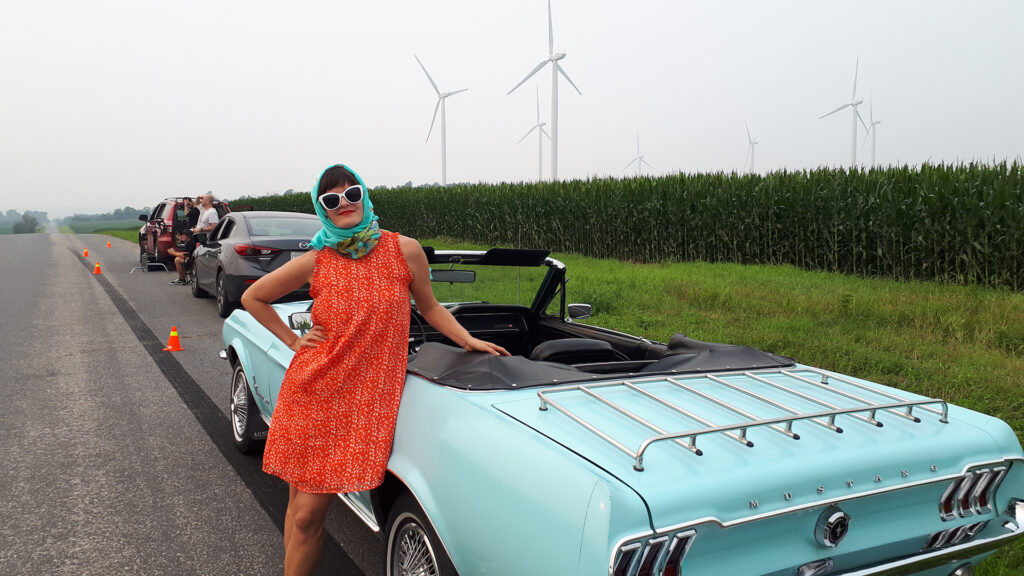 The 1967 Mustang really stood out for a number of reasons, with brilliant performance, excellent looks, and relative affordability. Of course, the latter doesn’t apply anymore, given that the car is now a sought-after classic. Ultimately, it’s not difficult to see why the car was — and, indeed, always will be — an icon of the automotive world.

You can see, hear, and feel what makes this car special in the latest episode of ‘Auto Aficionado’ here: https://youtu.be/WDs7UEeD-po