Petrol makes it to the top 20 web series in the world! 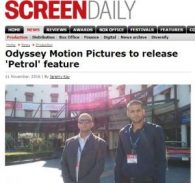 Exciting news from the AFM with the sale of distribution rights for the feature film version of Petrol The Series. Check out the exclusive article in Screen Daily by clicking here: